A Bee in your Bonnet

Google images, “A bee in your bonnet.”

You have a bee in your bonnet when you have an obsession or a crazy idea in your head. A similar expression is to “have bats in your belfry.” 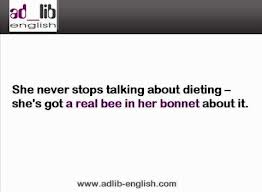 Google images, “A bee in your bonnet.” Click for video.

The original expression that was used in the 16th century was “to have a head full of bees.” But, due to alliteration (to have two words beginning with the same letter), the writer Robert Herrick changed it for “a bee in one’s bonnet” for his poem “Mad maid’s song.” If we think that is bee is an insect that makes an irritating buzzing sound, just imagine having it under your hat. You wouldn’t be able to think clearly of anything else because of the buzz.

Google images, “A bee in your bonnet.”

• Derek is insisting again in applying for that university againg. This is his 6th attempt. He has been rejected every time but he thinks that one day he will be accepted. He is totally disqualified for that option but he hears nothing about that. Everybody agrees that he has a bee in his bonnet about that school.

I am an English teacher willing to share knowledge and experiences with all my students and friends.
View all posts by felipevelazquezmarines »
« Previous post
Next post »

3 responses to “A Bee in your Bonnet”