The Albatross Around Your Neck 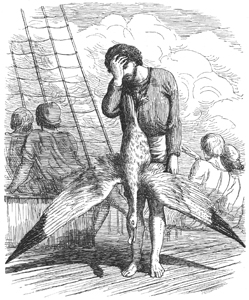 An albatross around your neck is a reminder that you did something wrong. It also refers to a burden or heavy load of which we cannot get rid of easily.

In “The Rime of the Ancient Mariner”, written in 1798 by the English poet Samuel Taylor Coleridge, a young sailor kills an albatross (a large seabird). Since killing such a bird was considered as a sign of bad luck by superticious sailors, and a lot of  bad things happened to the ship after that incident, the crew blamed it on the poor young irresponsible sailor. Then they hung the bird around his neck so he remembered that he had brought bad luck upon them all.

Boy: “Mom, why did you marry my dad if you always keep fighting?”
Mom: “Shut up! You little albatross around my neck!” 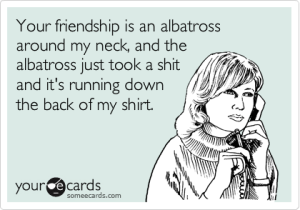